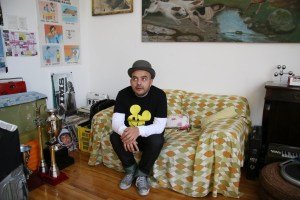 Since 2004 Mexico City-based DJ and producer Camilo Lara, aka Mexican Institute Of Sound, has been at the forefront of a new wave of Latin American musicians that fuse traditional music of the region with more modern sounds. His efforts have led to 3 releases to date, including Méjico Máxico, Piñata and 2009’s Soy Sauce, which have garnered critical acclaim in publications like Spin, NY Times, and URB.

Along with his role as president of EMI Mexico, Camilo is on the grind spreading the word about the sounds the are emanating from south of the border. He took time out of his busy schedule for our latest installment of 7 questions with…

A&H: Tell me a little about your background and the Mexican Institute of Sound

Camilo: Ive been working with musicians since I was 14. Both my brothers had bands, and I started doing remixes for friends and then I decided to do it on my own. That is how I started!

A&H: Your name is frequently mentioned when the U.S. press covers “underground” Latin American, or Latin-influenced electronic music (i.e. Toy Selectah, Nortec Collective and Bersa Discos). Do you see M.I.S. as a part of some bigger Latin electronic music movement?

Camilo: Well, in a way yes. I guess its like being Ian Dury during the beginning of New Wave. He was a punk doing things differently, but for the media he was a New Waver.

There is one idea on the air, that’s a fact. Funny enough, its happening all over Latin America. I feel close to the ZZK guys from Argentina, Toy Selectah from Monterrey and Nortec from Tijuana. We all grown up listening to the same music. Electronic music, regional music, lots of Cumbia and Norteño, so we have that in common, we do music that has those elements in common.

It’s also great for press and retail to put everything in the same bucket and sell it! Ha ha ha!

A&H: For those who have a limited knowledge of this scene, the fusion of styles, of electronic music and regional Latin American music, has been happening for quite some time. At some point, did you realize that there was a definitive movement happening?

Camilo: Its more of a generational thing. The previous generation wanted to fuse rock with Cumbia, because, they grown up listening to The Clash and the Ramones. When I started going out, we listened to the Happy Mondays, and all the Manchester & Bristol music, so I guess our background is different. We all were listening to the same kind of music, so we all wanted to go in a similar direction. I guess when 2 or 3 people do something right in a generation, it becomes a Movement! Ask the punks or the goths.

Not so sure if is a movement yet. All I know is that we have the same age and taste in music.

A&H: Movement may be a strong term for what’s happening, but there does seem to be a lot more interest in the United States in what’s happening south of U.S. border musically. Do you think that U.S. music journalists are just starting to pay more attention, or is it more of a critical mass of artists pushing their stuff out there?

Camilo: I guess both. The UK and US are definitely taking a deeper look into emerging countries. Not only in music, in films and art too. The world is smaller now!

A&H: In addition to your roll in M.I.S., you’re a part of EMI Mexico. Do you think that perspective on the music business has influenced the way you get your own music out to people?

Camilo: I started working when I was 16 at EMI, so probably it did, but it’s two completely different activities. One is sitting answering emails and phone calls, and the other is creating and performing.

Camilo: We’re doing a lot of things. Right now, we’re finishing a record with Money Mark, Quique Rangel from Café Tacuba, Julieta Venegas and Marthin Tulin from Los Fancy Free, and I love what we recorded. Also, I’m remixing a lot of people. Tom Tom Club, Chris Holmes and Julieta Venegas. We’re doing some traveling for performances in Brazil, Europe, and of course there several festivals in the US