1. David Byrne / Brian Eno – “Everything That Happens Will Happen Today”

This collaboration is the first for the two since the My Life in the Bush of Ghosts record came out in 1981. The material is as fresh and anything else that’s out today, and that’s no small task considering the innovations in the music over the past 30 years. It’s nice to know that in a world populated by temporary musical fads that two veterans made the best record of the year.

This synth funk, space age hip-hop, out on Stones Throw Records was a real surprise. It comes off like something Devo would have made if they had more soul, or something Rick James would have made if he had more of a New Wave sensibility. This is a truly unique record, something that stands out in the sea of noise that came out this year.

This record came out in a blaze of glory. His debut on Warp Records set the bar for everything else that dropped this year. The production style is like creeper smoke. It sounds instantly familiar, beat drops, you start to hear the breaks and then, WHAM, something hits you that is completely unexpected.

This is a supremely fresh take on psychedelic hip-hop. His great Aunt is Alice Coltrane, so it’s almost in his DNA. 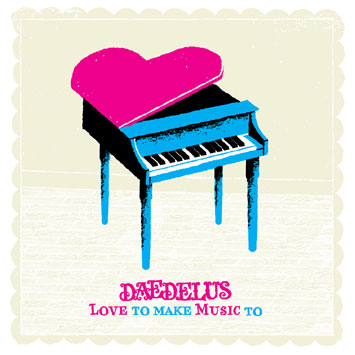 LA’s very own Alfred Darlington, aka Daedelus, has been making some waves for sometime. This record, which features collaborations with Paperboy, Michael Johnson, Taz Arnold and Om’Mas Keith of Sa-Ra, 1200 Techniques’ N’fa, Erika Rose, and his wife Laura Darlington, is his most sonically dense and most diverse record to date. His skill as a multi-instrumentalist really shines through on this record and the variety of the production styles really show a kind of artistic development that’s rare in most of his contemporaries. Ninja Tune knew what they were doing when they put him on the roster.

Even though this record technically came out in 2007, it’s been in wide circulation here at the A&H camp all year. This record takes the “ambient” music template and turns it on it’s ear. While SCO has always been known for his use of fierce beats in his production, the sparse use of the “Knockout Drops” here is like the anticipation of something really good. Rumor has it that that he’ll be dropping some new tracks in 2009, so maybe you’ll see his name on this list come this time next year as well.

OK, I have to be upfront here and say that I really, really didn’t want to like this record. Maybe it’s because I saw the press photos before I REALLY listened to the record, and that’s my bad. I mean, to be honest the photos remind me of some hipster, fashion, trust-fund, urban outfitters photo-spread… but I’ll be damned if this record isn’t an amazing freak-beat, psychedelic roller coaster. Dave Fridmann, Flaming Lips producer, sat at the producers chair for MGMT’s debut record and you can tell, it has that Tarbox residue all over it.

This kind of falls in the category of “guilty pleasure” for me, but for a very good reason. This is a jacked-up on E, glow-stick waving, unabashed homage to 90’s rave music with a glitchy twist. You can listen to this record in a couple of different ways. Make it the soundtrack to a good party, and you’ve got the perfect backdrop for your own rave, or you can take the headphone route. Do a little “deep listening” with this record and you’ve got something so technically interesting, that you’ll want to dig out your old Aphex Twin records to compare and contrast.

I’ve heard this record called “fantasy dance pop,” but this doesn’t do justice to what Randolph Chabot, aka Deasto has done here. Now, I will say that there are moments that conjure up unicorns and dragons, but doesn’t all good space rock do that? I think what’s amazing about this record is it’s ability to transcend the trap that most other records of this genre fall into. It does not repeat itself, it does not feel tired after more than one listen, but still manages to play like Zelda anyway. I’m looking forward to more work from the up and coming producer.

I’m a big fan not repeating what others has said (and in this case NUMEROUS times). This is a good record, go buy it, download it or do whatever you kids do these days.

This is another artist who’s been around long enough to know how to drop a record that can outlast this weeks Pitchfok forecast. This record is Meat Beat Manifesto’s 20th anniversary release, and finds Jack Dangers mining similar sonic territory with amazing results. The mix of dub, dubstep, psychedelic noise, hip-hop and industrial come together like Voltran to form something much greater than it’s parts. It’s amazing to hear something so fresh from Jack and I’m not alone when I say that I can’t wait to see what’s next. It’s in my brain now.