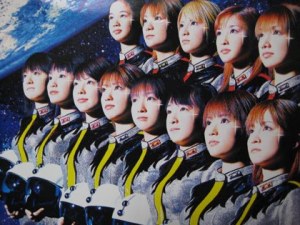 Summer of 2009 has been quite a roller-coaster ride. From those of you dialed-in to the A&H camp’s output, you know we’ve maintained radio silence for the past few months. We’ve been on summer sabbatical, but that’s not to say we’ve been lazy. The summer of 2009 has been filled with our first party in Los Angeles, attending live shows, the continuation of our Packin’ Heat night DJ nights and the production of the Create:Fixate podcast. We lost some exceptionally talented artists in the Summer of 2009, but there was more celebration of the work these artists left us during their time here on earth. Let’s keep on living, shall we?

We had our very first (and, by all accounts, chaotic) party here in Los Angeles.

There were live performances by Mochipet and [a]pendics.shuffle, some killer DJ sets from Sodapop from Anticon and Oro11 from Bersa Discos. And the behind the scenes business? Damn. Here’s some evidence. Shit’s real son. But, that was our July opener…

This summer there were so many shows, DJ gigs and after parties that it’s hard to nail down what was best, but these were some stand-outs:

1. Black Moth Super Rainbow at the Troubadour
I first heard Tobacco and company on KCRW’s Morning Becomes Eclectic, and thought that they were amazing. Like a cross between Boards of Canada and early Flaming Lips. I honestly thought they were more creatures of the studio, rather than a full band who could hold it down. I was wrong. They were fantastic live, and toward the end of the show, none other than Mike Watt jumped on stage to perform with them.

2. Flying Lotus / Daedelus destroy LA party at the Henry Fonda Theater in L.A.
So, it’s safe to say that these guys started in L.A., but now have the whole fucking world in their sites. Putting together a sick and diverse line-up of talent for this show, this scene is at the tipping point. Anchored by the weekly Low End Theory club and by the extended music family that is the Brainfeeder Crew, this scene has really blown up to epic proportions in the past few years. Boosted by International DJs, connecting with a global cast of characters and releasing some of the most amazing bass-driven electronic music to come out of America, I can’t wait to see what’s next for these guys.

3. Flaming Lips at the Greek Theater
This is my hometown band. I first saw them play when I was 13 at the Student Union at the University of Oklahoma. The fact that these guys are now festival headliners, creating amazing music AND maintaining relevance in a scene where bands are on-and-off of the radar in a blink of an eye after being together for 25 years is proof that staying true to your vision over time can make you a star.

Oh yeah, their live show is like going to the circus.

4. Santigold & Femi Kuti at Hollywood Bowl
The Hollywood Bowl. This was my first trip to this historic Los Angeles venue. I wasn’t expecting such “sit-down” venue. While the space is beautiful, I thought is wasn’t really suited for the bass-hyped, blog-friendly, “friend of Diplo,” internet sensation Santigold…but I was wrong. Raphael Saadiq (who say’s there’s not life after the 80’s? Since this dude fronted Tony! Toni! Toné! and has now reinvented himself as a 60’s soul dude in 2009…right on man) opened the show, which was great, but it was still daylight out, so it was the vibe was kind of flat. As the sun dropped behind the Hollywood Hills, Santigold simply burned the place down. At one point, I looked around and the entire audience at the venue was on it’s feet. Lights out.

Femi was rad too. I mean, come on…he’s Femi Kuti, you know?

5. Telefon Tel Aviv at Spaceland
With the death of Charles Wesley Cooper, the founder of the band, there was much speculation about what would happen to Telefon Tel Aviv. Having listened to all of their records, but having never seen them live, I’m not sure I have the best perspective on “what was” versus “what is.” What I can say, is that was one of the best “electronic” music gigs I’ve seen in a while.

So many sounds push themselves into my ear…

Always the consummate DJ, I’m constantly listening to new stuff. A twitter link here, a burned CD there, some crazy kid in skinny jeans at the burrito place in Echo Park talking some new garage band…I’m always hunting for noise. Here is what caught my ears this summer.

1. Cex – Bataille Royale
This is like some crazy hybrid strain of pot that is shipped in from outer space. The once snot nose, shit-talking, former IDM list “it” guy, grew-up, retreated to Baltimore and has emerged with this. It’s an AMAZING take on Baltimore club music, spliced with a mutant strain of electronic music (pioneered more by Jonah Sharp, FAX records and Tetsu Inoue than Squarepusher) that takes it, and pardon the cliche, “to next.” It’s truly ambient club music, and really a stand-out record.

2. Furious Stylz
This new bass freak-out business by Telephone Jim Jesus, from the Anticon camp, and SkyRider Riddim, has been in wide rotation on the ipod. This stuff is highly addictive, and a new twist on dub, bass, low-end and um…dub. Highly recommended.

3. The Race
I just saw the race open up for Telefon Tel Aviv. A great live/electronic act, that somehow minds the gap between Joy Division, Aphex Twin and Big Audio Dynamite.

Hat’s off to loss…

There were too many talented people that died this summer. There’s been too much talk of Michael Jackson’s death, so I’ll keep this short. Since I personally don’t think MJ released anything worth listening to since 1984 (U2 hasn’t either, and again, that my personal opinion so please keep the hate mail to a minimum), I’ll leave it at this. He was an amazing artist and performer, and he died too early. And then there was DJ AM. So many kind and eloquent words have been said about him and his passing, that I don’t think I could do justice by adding more. As a DJ and producer, I was inspired by the man. I listened to his DJ sets, and studied how he operated. Diplo said it best, “Listen up. All u have when u pass away is the relationships u left behind.. AM was still friends to everyone he met. And the king of us djs.” Well said. You will be missed.

Thanks Summer of 2009, you were awesome. Call me sometime.